It could not have been better timed – within a few minutes of reading last weekends apocalyptic weather forecast for Scotland, Ric had sent me the forecast for Fontainebleau. Faced with the prospect of turbo-thaw, heavy rain and 100 mph winds in the hills at home or wall-to-wall sunshine, cool temperatures and dry rock, the decision was an easy one and I booked flights that evening.

The journey was fairly eventful and involved flight delays, missed trains, kipping in lay-bys and strong service station coffee but we eventually arrived in Font on Friday morning (13 hours after leaving Aberdeen) to the perfect conditions we were promised. With Ric rehabilitating a finger tendon injury and the impromptu nature of the trip, neither of us had any grand designs on hard projects so we decided to explore the circuits at Rocher Canon,  a venue we hadn’t been to before. 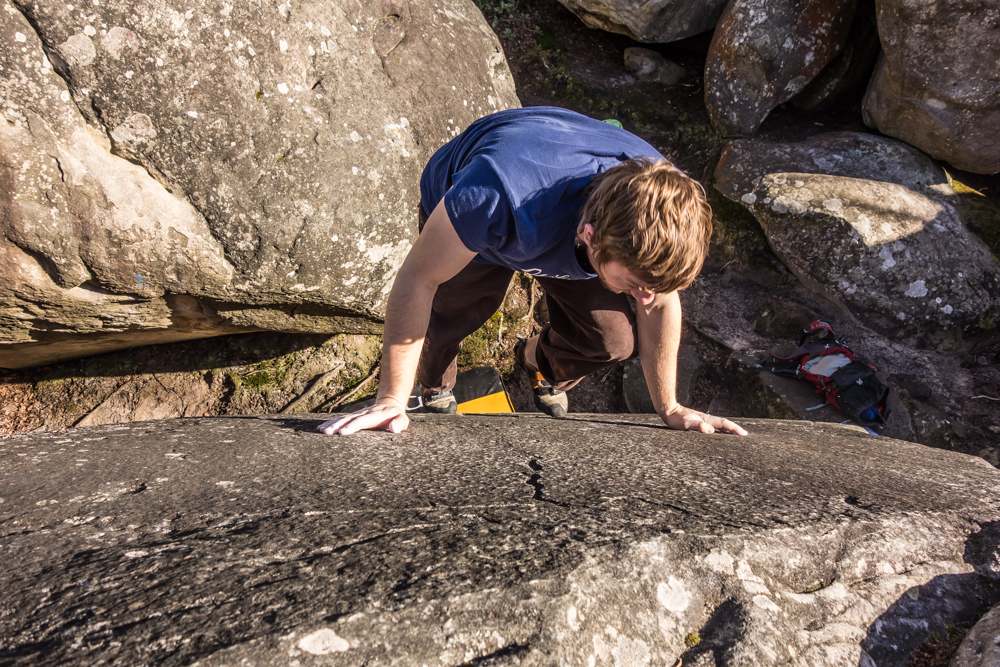 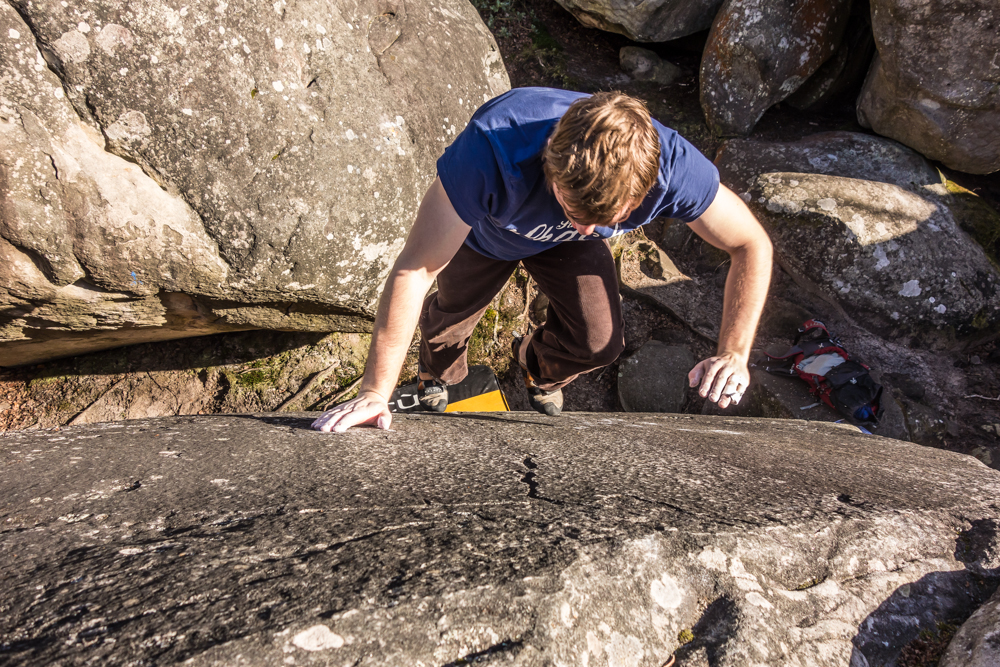 We spent a few hours working our way around one of the easier circuits before being tempted on to a couple of tricker problems characterised by movements on very sloping holds. With the temperature hovering in the low teens it was just about cool enough to get the friction required between skin and rock to climb the routes Styrax (6b) and Le Bossu (6b).

As befitting of our current jobs in the liquidity-challenged oil industry, that night we dossed in a car park in a local village. We somehow managed a brilliant night’s sleep and fuelled by strong coffee and exquisite patisserie went to Bas Cuvier the next day.

Another night of dubious lodgings followed and it was two tired climbers who made their way to Franchard Isatis for the final day. Psyche was high though and I was intent on putting my new rock shoes’ edges and my own technique to the test on the classic L’Angle du Serac (6b+) – a striking sharp arete with micro-footholds. I had been soundly spanked by this problem on our last trip and went home knowing I should have done better. This time was very different and in the cooler temperatures and with the right shoes it was an absolute pleasure to top it out! 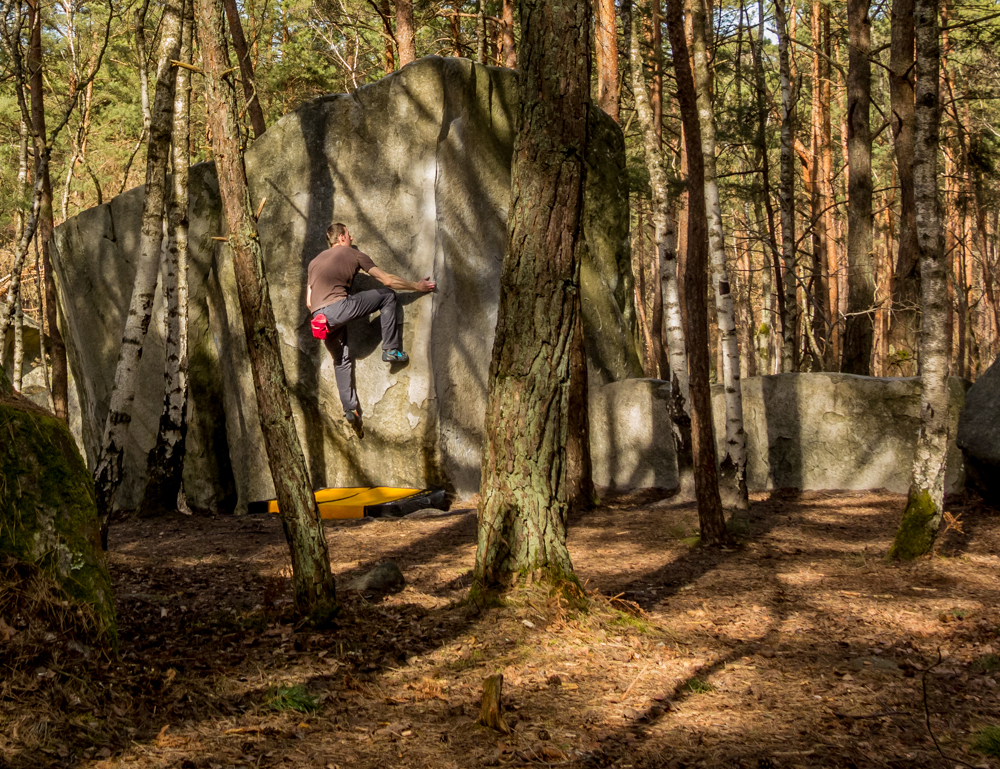 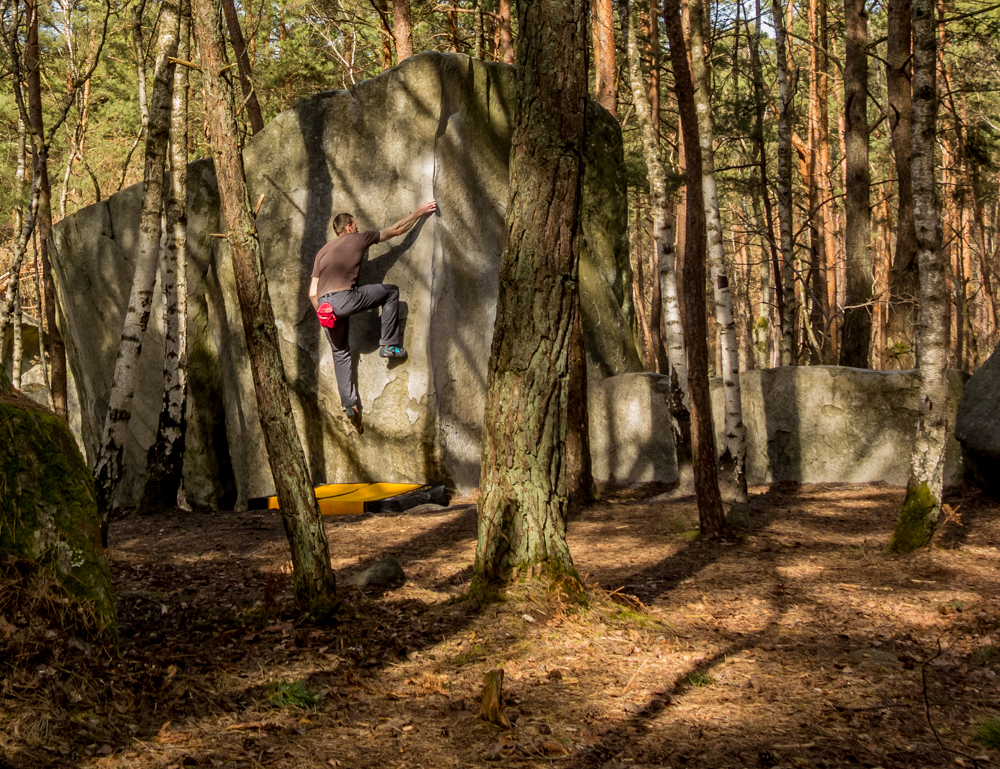 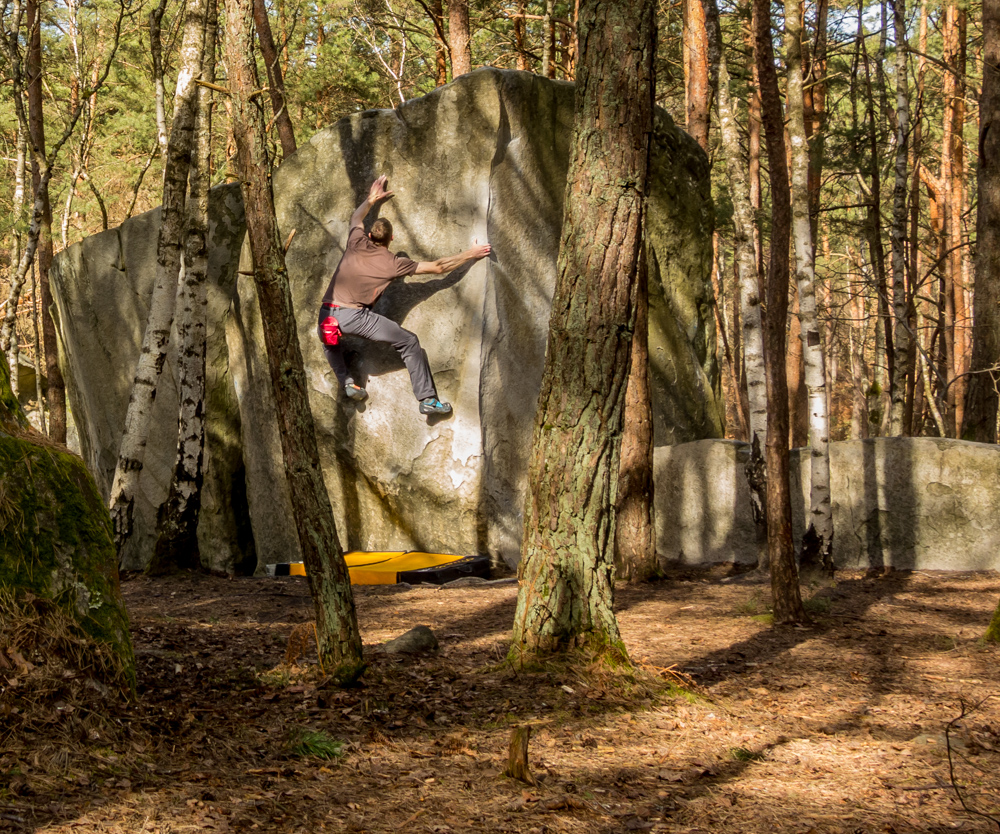 Ric flew up L’Angle Du Serac first time and then made short work of the photogenic rising edge of Le Sandwich (5+). 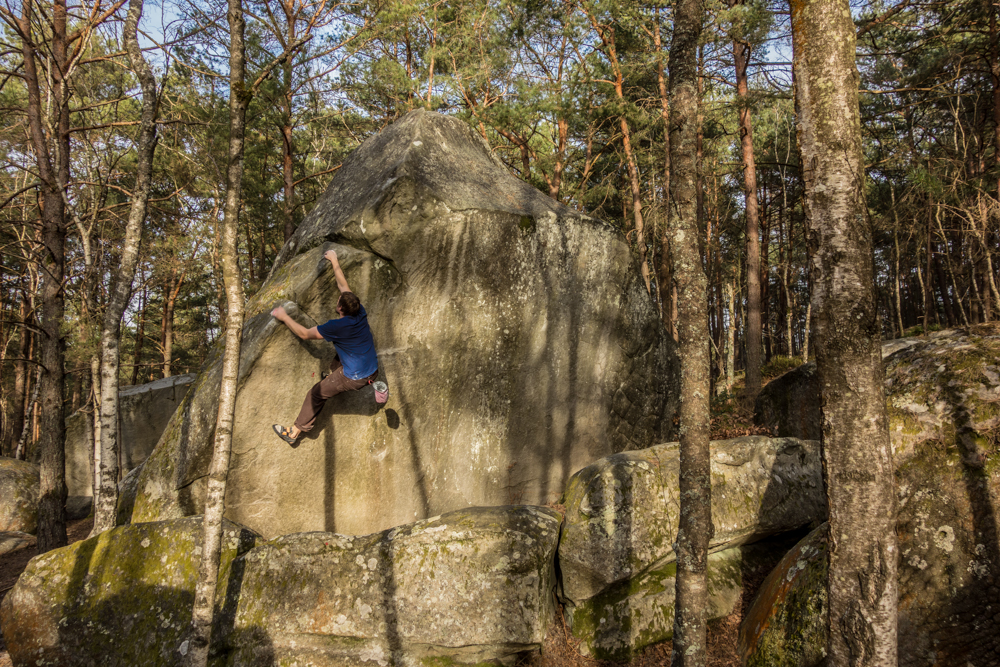 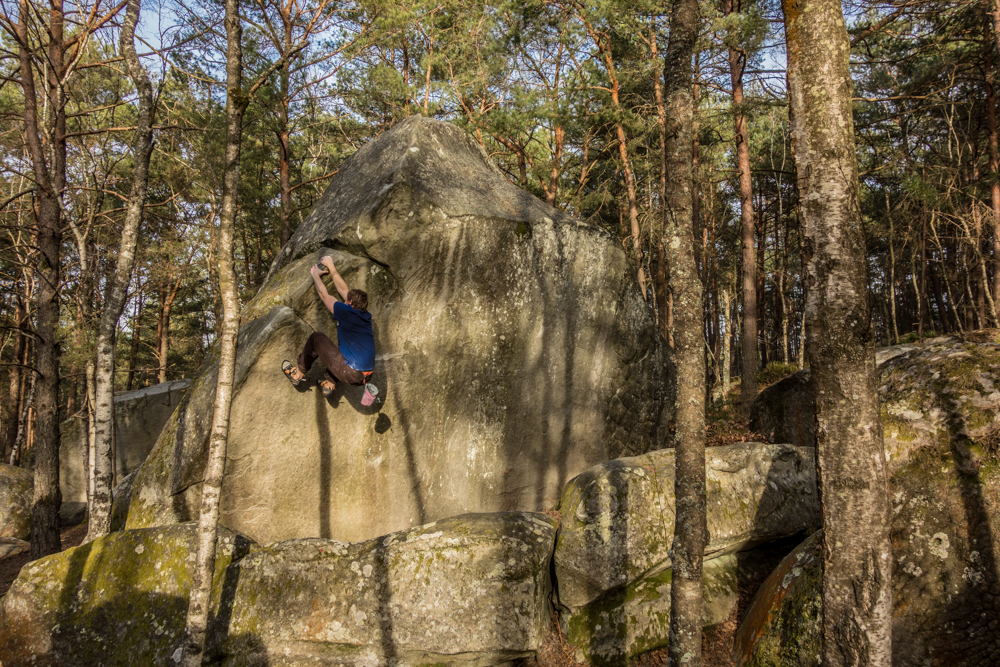 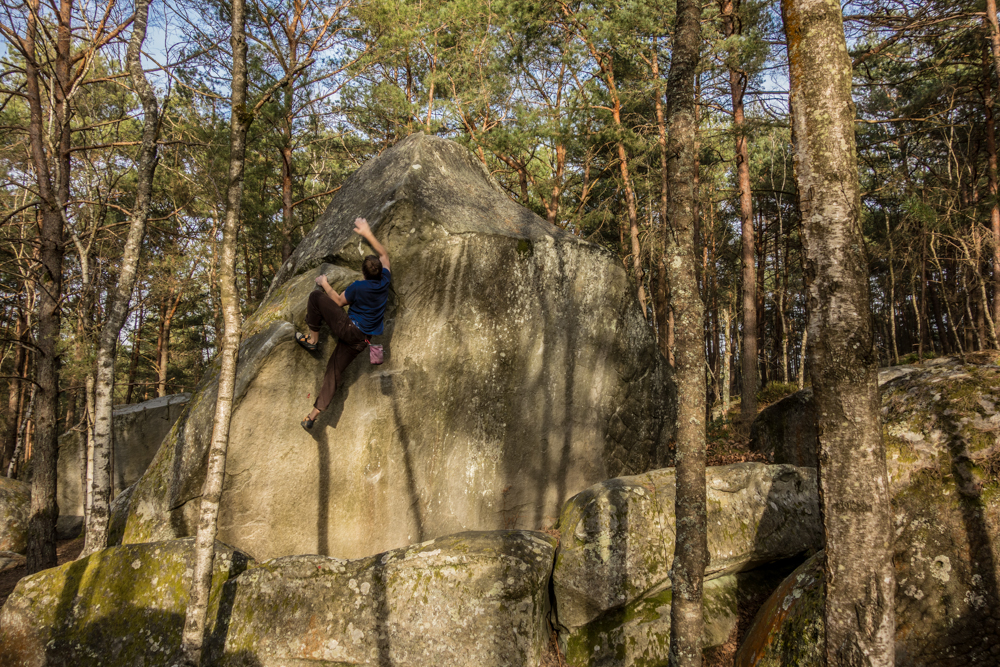 On a previous trip Ric had sent the notorious Little Karma (6c), a test-piece at the grade that combines all the ingredients that make bouldering in Font so good – technique, power and a horrendous sloping top-out. After showing me and a gang of locals how it was done, Ric kicked back with a baguette and oversaw a couple of hours of effort from myself. Being unable to match both hands on the second hold and hence follow the same sequence as Ric, I had to work out my own moves. By the time I had them dialled I was too tired to actually make them and one attempt at the top-out in isolation proved that it wasn’t going to come together today.

Some consolation was had though in the form of a (cheap) tick of yet another arete – Le Renard Bleu (7a). The problem starts in a sitting position on the right hand side followed by some lay-backing and a tricky move around the arete on a calcite pinch.  From there, taller folk can make another foot move and get a high pinch near the top of the arete and gradually bump up to the top.

So an unexpected but brilliant weekend in the forest which has only made me look forward to the next trip all the more! Roll on May!