After our extended stay in Chamonix had come to an end, Ric and I headed north and spent the next few days taking topless photos of each other. This may seem strange at first, but we had arrived at the world class boulders of Fontainebleau and this kind of behaviour is not only condoned, but encouraged here.

To the uninitiated, bouldering itself may seem odd, but the act of distilling rock climbing down to it’s most fundamental elements – technique, strength and problem solving, is absolutely compelling. Figuring out the sequence of moves with your friends, focussing on executing them as perfectly as possible and climbing right at your physical limit, is a satisfying and addictive pursuit. Not to mention the rewards gained from taking what you have learned on the boulders and applying it to much bigger, more serious routes.

Ric and I both had projects we were desperate to get ticked so headed to Roche aux Sabots to get to work on them. After warming up on the miriad of high quality easier problems, we set about attempting the well known test-piece of Jet Set – a technical, fingery wall finished with a large dyno (jump) to the top.

Having tried the problem previously, we had done our best to recreate the moves using artificial holds at our local indoor climbing wall. Whilst we ended up constructing an impossible route, something must have worked because within an hour Ric had climbed the real thing!

Next we moved around the corner for a session on L’Oblique, a problem I had tried on numerous occasions but could never work out a sequence that suited me. I had also struggled with endurance; one of L’Oblique’s many challenges being the high number of moves involved. This time was different though and after working sections of the problem in isolation for a few hours, I eventually linked them together to send my first route of this grade! 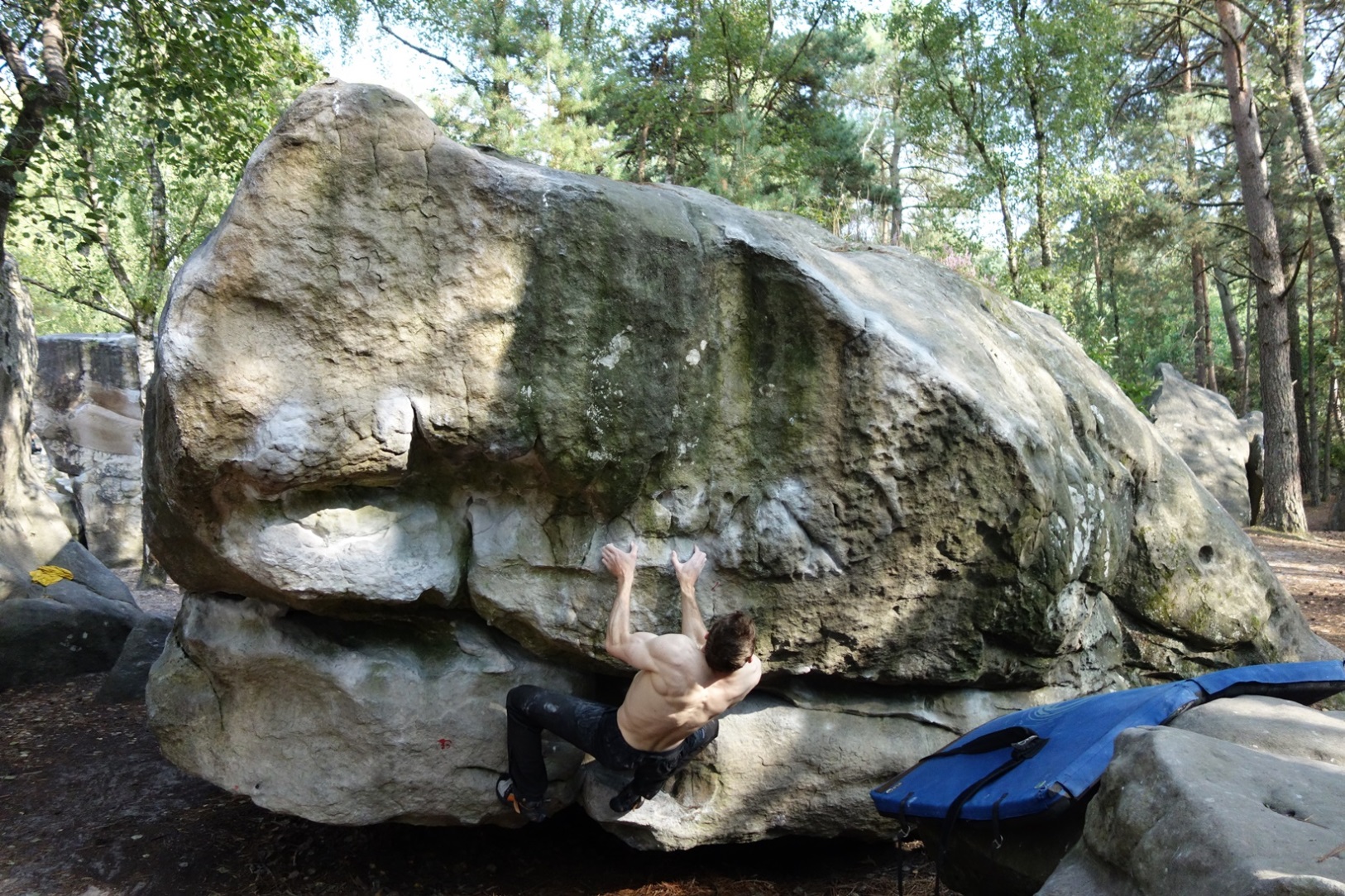 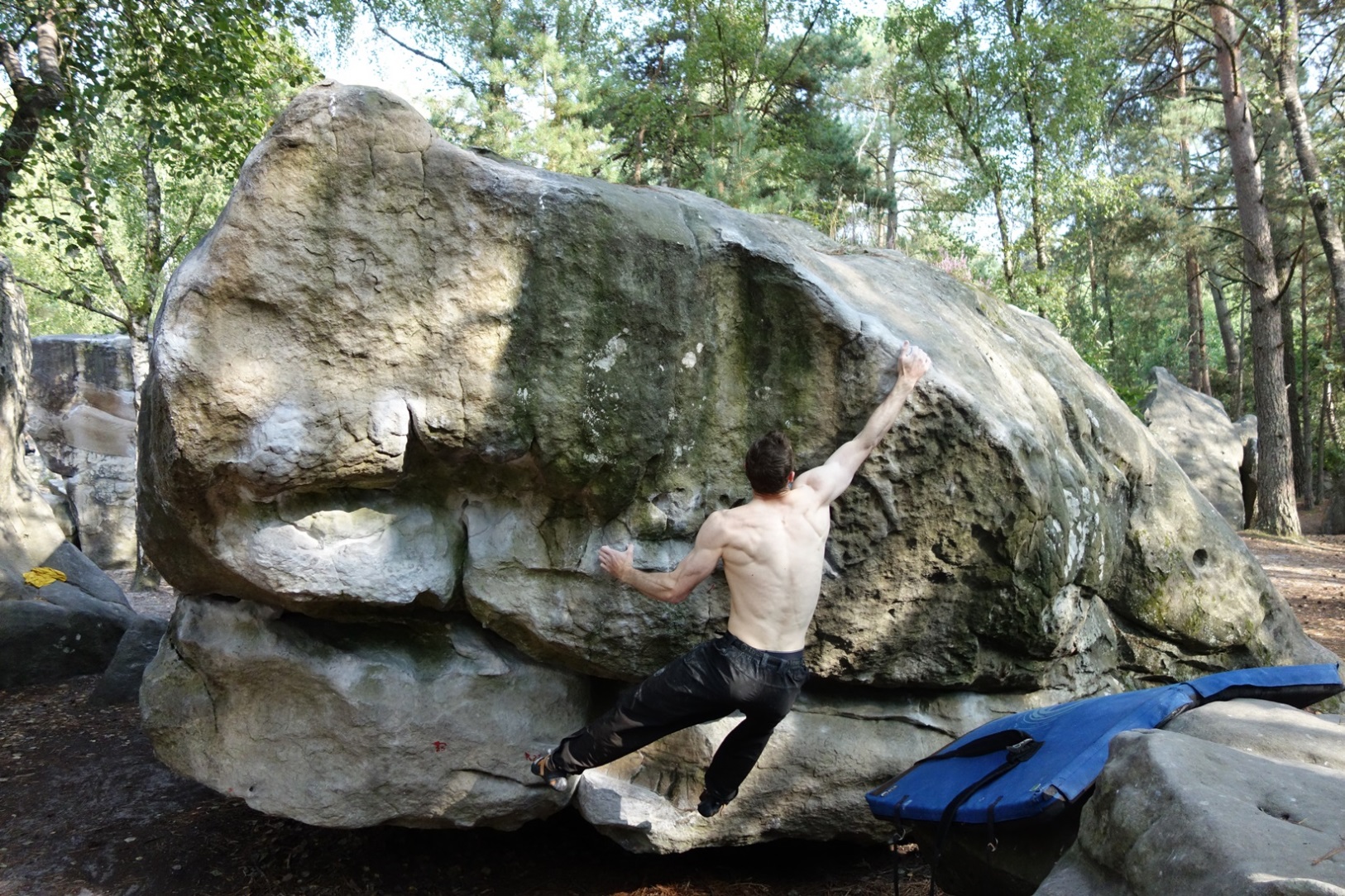 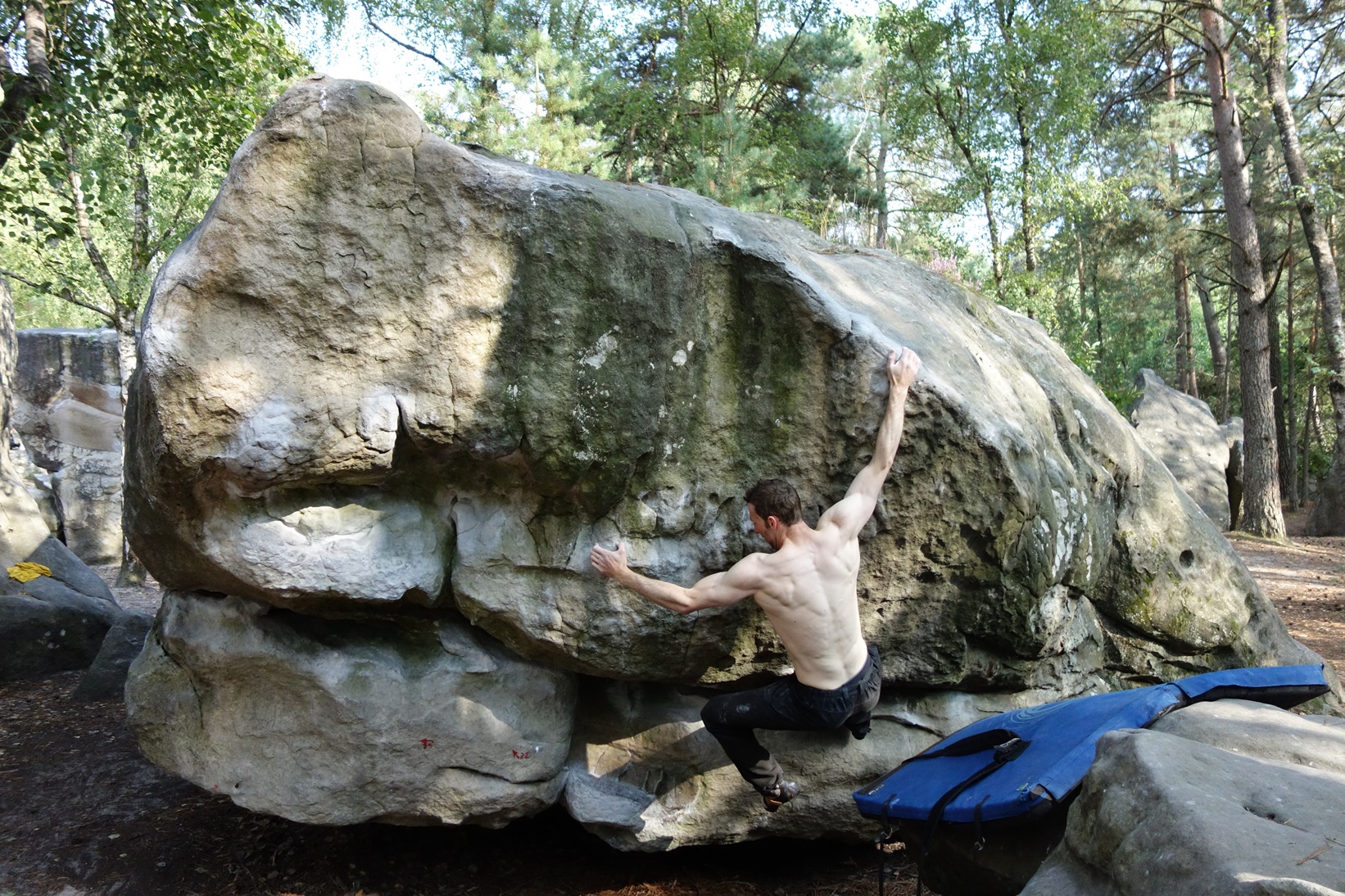 Buoyed by the successes on our projects we decided to aim higher and have a play on what can only be described as a one-move-wonder. Smash is a great way to blow off some steam and risk severe injury.

After many, many attempts Ric had come within an inch of holding the top, but with a full-body pump on the go we decided to call it quits as we had another four days ahead of us.

The following day we visited Apremont, a venue near the picturesque village of Barbizon. Years ago, on one of our first trips to Font, we had managed to get completely lost and failed to find the boulders for about three hours as we wondered witless through thick forest and along rocky ridge crests. Remarkable really considering the first boulders are about 10 minutes walk from the car park. Determined to not make the same mistake twice I had briefed Ric beforehand and warned of the narrow, confusing paths and dense vegetation. Confident in our map reading abilities and sense of direction (we are geologists after all) we strode purposefully towards the climbing. An hour later we were surprised to have not seen any climbable boulders but after some more bushwhacking, swearing, near-death experiences and tears we finally stumbled upon them. A less than successful day followed with one notable exception – Ric dispatching the committing Science Friction after a handful of goes!

That evening Debs flew back out to meet us and we collected the London contingent from the local train station, meaning it was a seven-strong team that made their way to the hilltop venue of 95.2 the following day. The weather was scorching with temperatures nearing 30 degrees in the sun. Ideal beach weather then, but terrible conditions for climbing that relies heavily on friction. We had a good day despite this and all had a laugh doing beached whale impressions as we topped out on greasy sloping holds. A slackline even made an appearance and Andy showed us all how it was done!  In the relative cool of the evening and with the aid of head torches, I worked on the starting sequence to a fantastic problem called Duel dans la Lune, one to come back for!

The following day was forecast cloudy and a little cooler, but we decided a shadier venue was in order to maximise the chance of good conditions. We spent the day at the superb Franchard Isatis, one of my favourite parts of the forest and host to classic problems of all grades.

After a quick repeat of the thugs’ favourite,  Le Surplomb Statique, we worked our way around the white circuit problems, succeeding and failing on all manor of features and bizarre rock formations.

The final day was spent at the convenient but excellent Bas Cuvier. Debs came tantalisingly close to finishing the polished classic, La Marie Rose, while the rest of us had fun on both sides of the equally classic (but a good bit easier) L’Angle Allain at Rempart.

Before heading home I couldn’t resist having a feel of what I think is one of the most inspiring lines in Font: Duroxmanie is a stunning feature and the problem is top of my list for our next trip!

As I write this back at home in Aberdeen, lashing wind and rain has given way to a still, cold night with the promise of frost. Winter climbing season is just around the corner…