Fresh from our adventures on Hammer, we took the opportunity to head out to the most westerly point on the UK mainland to sample the immaculate gabbro of the ring dyke crags of Ardnamurchan. These remote outcrops form part of The Great Eucrite – a series of ring- or saucer-shaped crustal intrusions of magma that have been exposed by subsequent erosion. The area is part of the Lochaber Geopark and world-renowned for it’s geological importance.

With a perfect forecast we trotted across the bogs heading for the “popular” venue of Meall an Fhir-Eoin, an outcrop around 60m high with multi-starred routes of one and two pitches long. The crystalline gabbro is incredibly rough and the routes (and grading) rely on trusting to the friction and the knowledge that you can basically stand on anything. To kick off proceedings Andy jumped straight on and romped up the crag classic, Yir (VS 4c).

Next up was another three-star route; the two pitch Volcane (E1 5b), which follows a superbly positioned finger crack, whale-back ridges and slabs up the left side of the cliff. The first pitch looks much harder than it is, with only a short section of tough 5a thin-fingers near the bottom before it eases into lovely flowing climbing up to the ledge above.

The second pitch continues the quality but ramps up the difficulty, with fingery moves up a slender groove leading to delicate padding on the slabs above – exciting stuff!

Following Volcane we wandered over to the adjacent Dome Buttress, eyes set on the pleasant slab and hanging groove of Greta Gabbro (VS 4c). This more moderate affair starts easily up rough slabs, with enough protection in the horizontal breaks, before passing (carefully) a detached flake to layback up the final groove.

Andy needed to drive all the way back to Aberdeen that evening but couldn’t resist a quick jaunt up the inviting hand-crack of Claude (HVS 5a). Once again the route starts easily before rock-solid hand jams lead with increasing difficulty to a flying hand traverse out right above the steep slab below – an exhilarating finish! 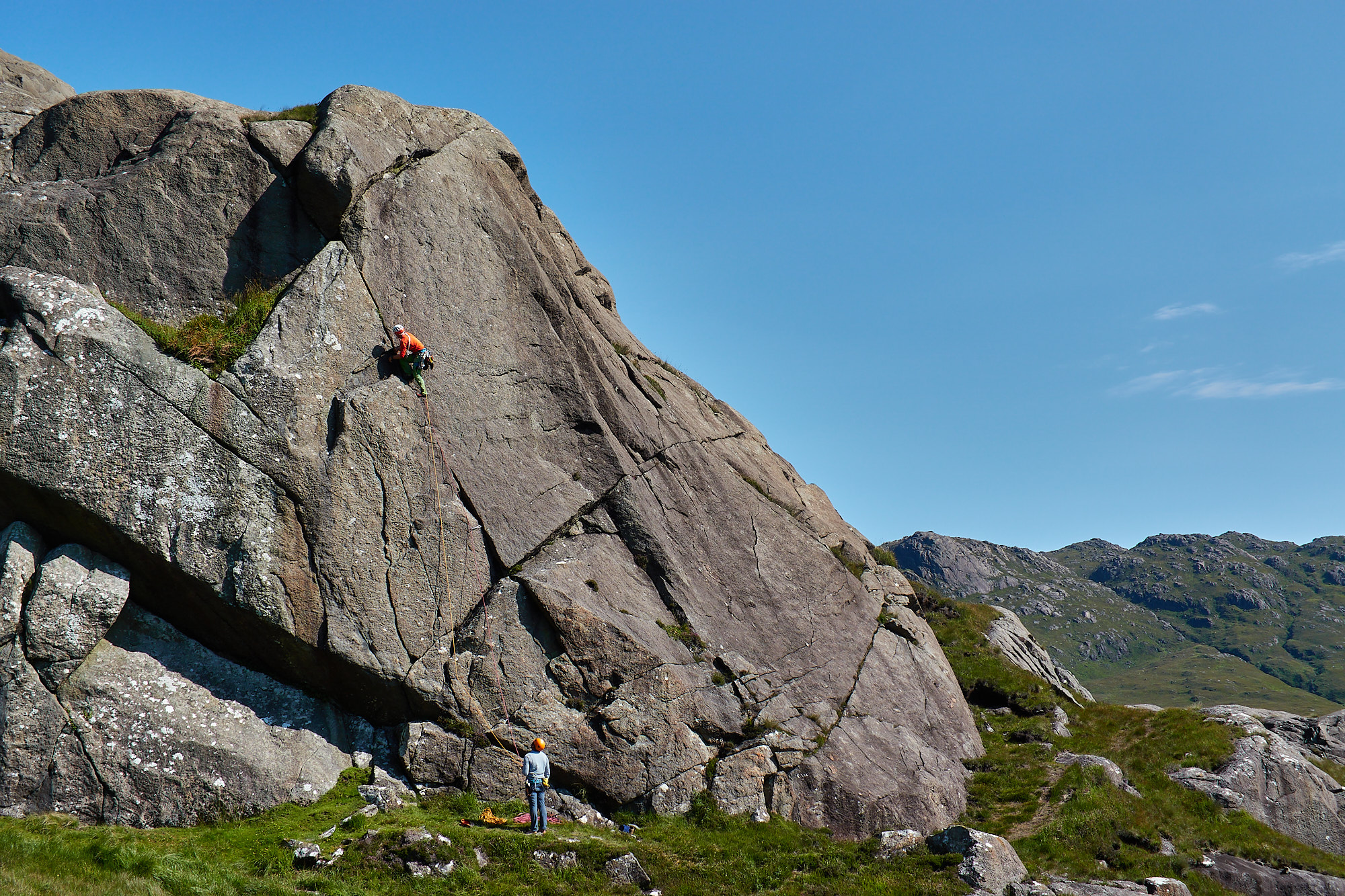 Andy on the superb hand crack of Claude

As Andy scampered away across the bog, Ric and I baked in the sun then decided to take a look at the technical slab and groove of Lust (E1 5b). The climbing was clearly bold but didn’t look too bad from below. Ric breezed up the intro slabs and arranged a cluster of gear beneath the blanker section, before tip-toeing up the near-holdless slab above. Way above the gear, the crux moves necessitated an off-balance cross-over to better holds in the upper groove – a fall from here would be pretty grim! Thankfully, holds appear in the groove and lead in a less serious manner to the top.

Hot, tired and dehydrated we scurried back across the bog to the road and drove down to the azure waters and golden sands of Sanna Bay, surely one of the best beaches in the UK, for a refreshing swim. A fitting end to such a brilliant day!

Unfortunately an unexpected thunderstorm put paid to much climbing the following day – I managed to squeak up Krakatoa (HVS 5b) before the rain and lightening hit and after seconding in the downpour, Ric and I sheltered in the cave above. Throwing in the towel (and wishing we had one) we did the tourist thing and visited the Ardnamurchan Point lighthouse, where we saw a basking shark, which was nice.