Storm Arwen and the following week of cold west and northerly winds has brought many mixed climbing venues into good early season condition. We wanted to climb on a crag facing the prevailing winds in the hope the rock would be rimed, the powder blasted away and the turf frozen solid. The north-facing Cathedral on Lochnagar fit the bill, so Andy and I headed in on a reasonable forecast with sights set on Judas Priest (V, 5). 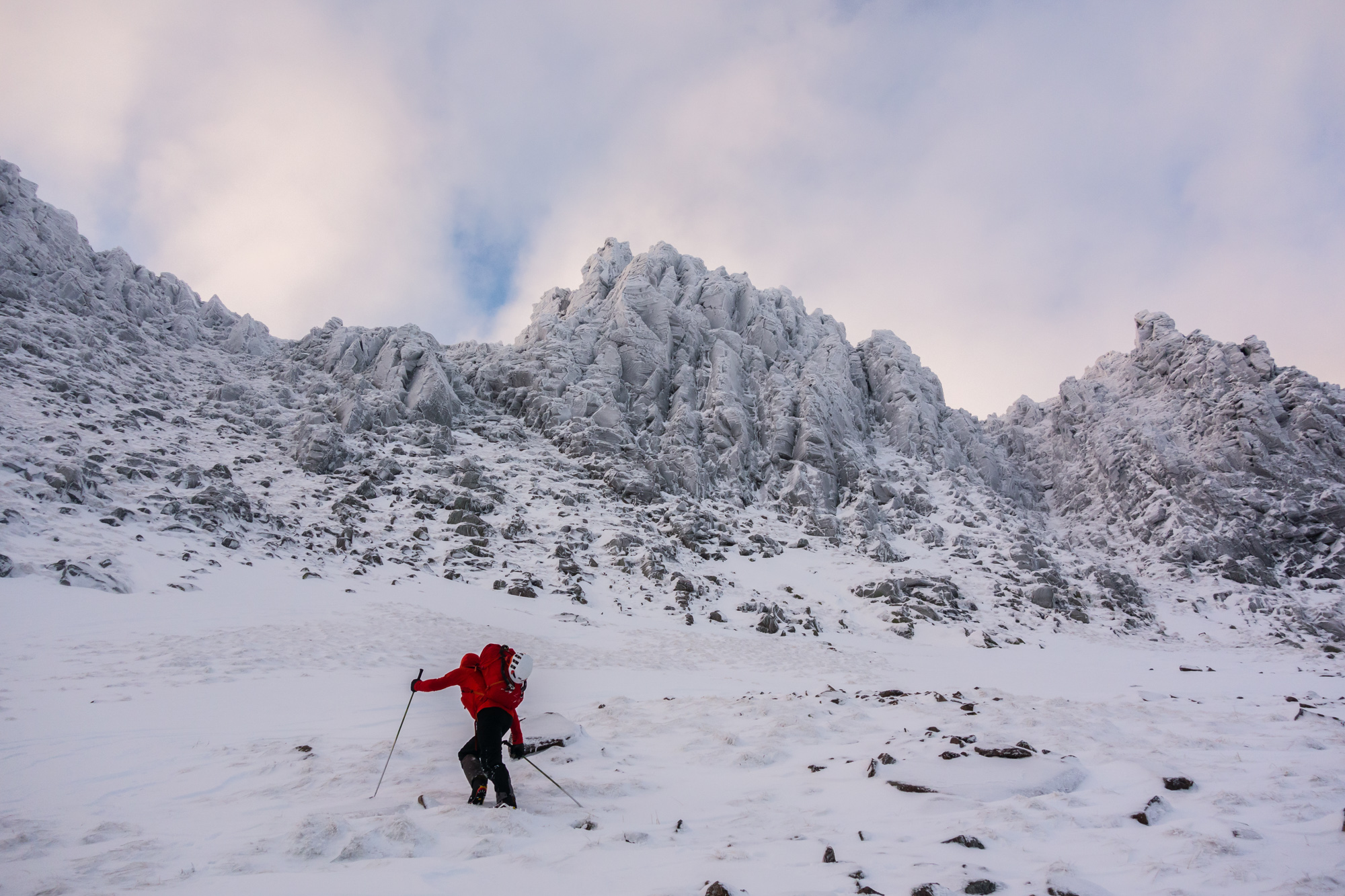 Andy approaches The Cathedral as the cloud lifts to reveal a white, rimed, wind-blasted crag – perfect conditions for mixed climbing

On the final part of the approach the clouds lifted and the wind dropped, the weather turning out much finer than forecast. The coire in general was less snowy than expected but anything with an easterly aspect had caught more of the fluffy white stuff. It was clear as the crag came into view we were in for a treat! 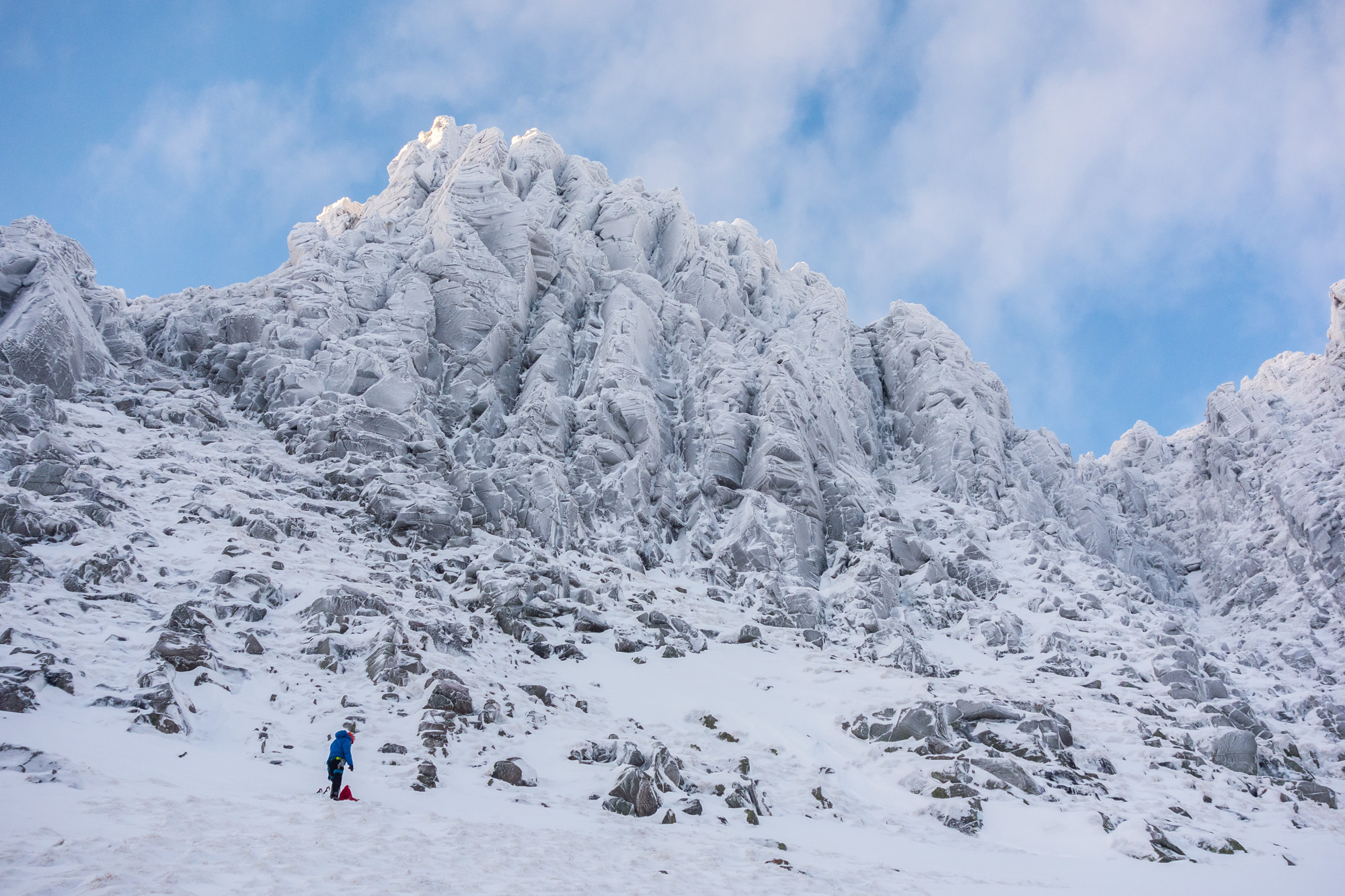 Gearing up beneath The Cathedral as the weather gets better and better. The line of Judas Priest takes the corner and groove emanating from the top of the central snow bay 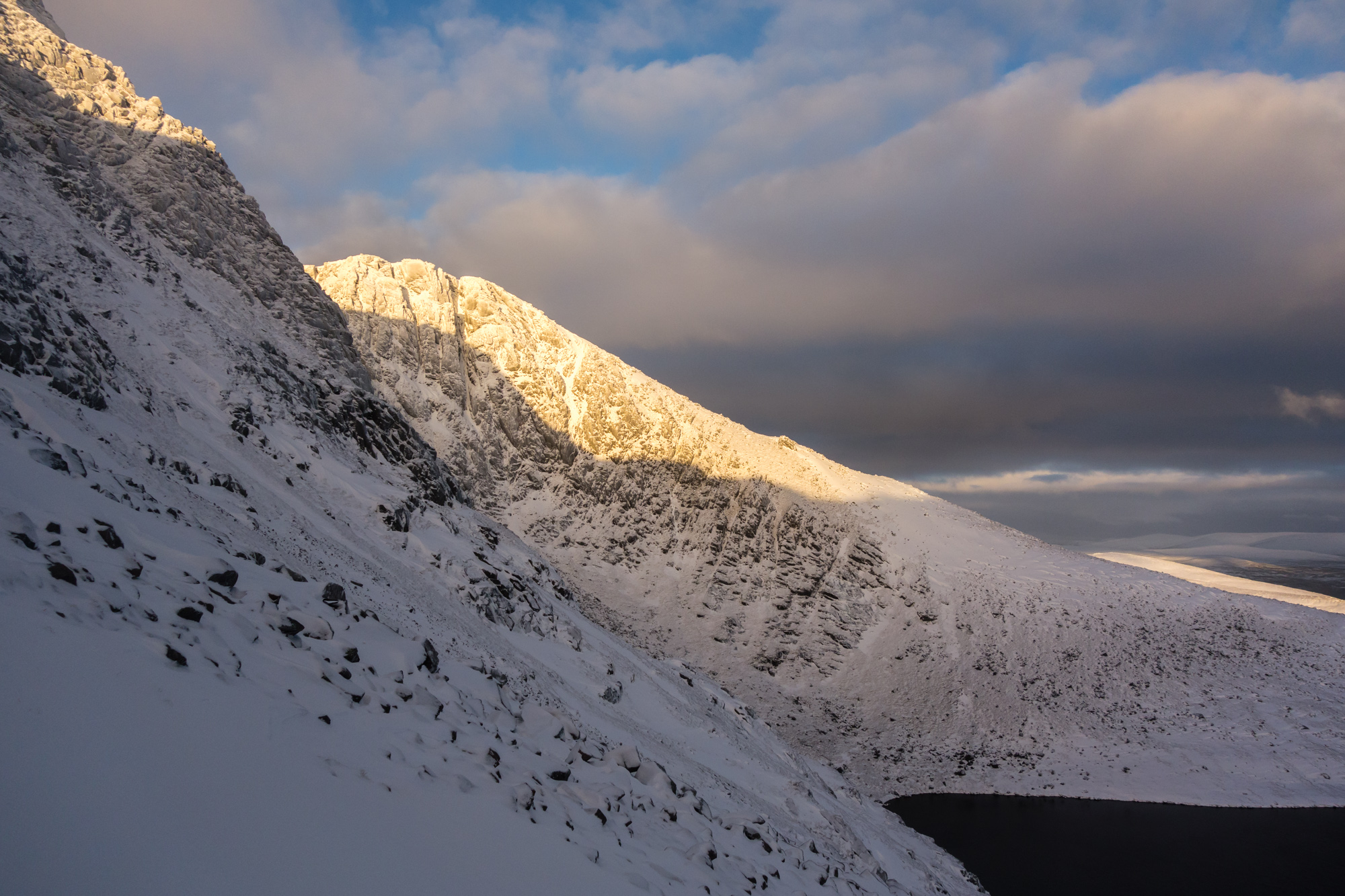 The sun kisses the top of West Buttress as we gear up. The prominent central defile of West Gully was the scene for our opportunistic late-season raid in April this year

I had previously attempted Judas Priest in 2017 but we made a rookie error straight off the deck and climbed the left of twin corners rather than the right. On that day we abandoned the route and climbed the superb Transept Groove instead but I had always wanted to return for a rematch. Sure of the line this time, I set off excitedly up the start of Trinity planning to return left at the first roof. Almost immediately my exuberance was tempered by steep terrain and a general lack of confidence, thanks to the paucity of winter climbing over the last two seasons. With time ticking, Andy took over for a valiant effort on the crux pitch, which turned out to be completely desperate! 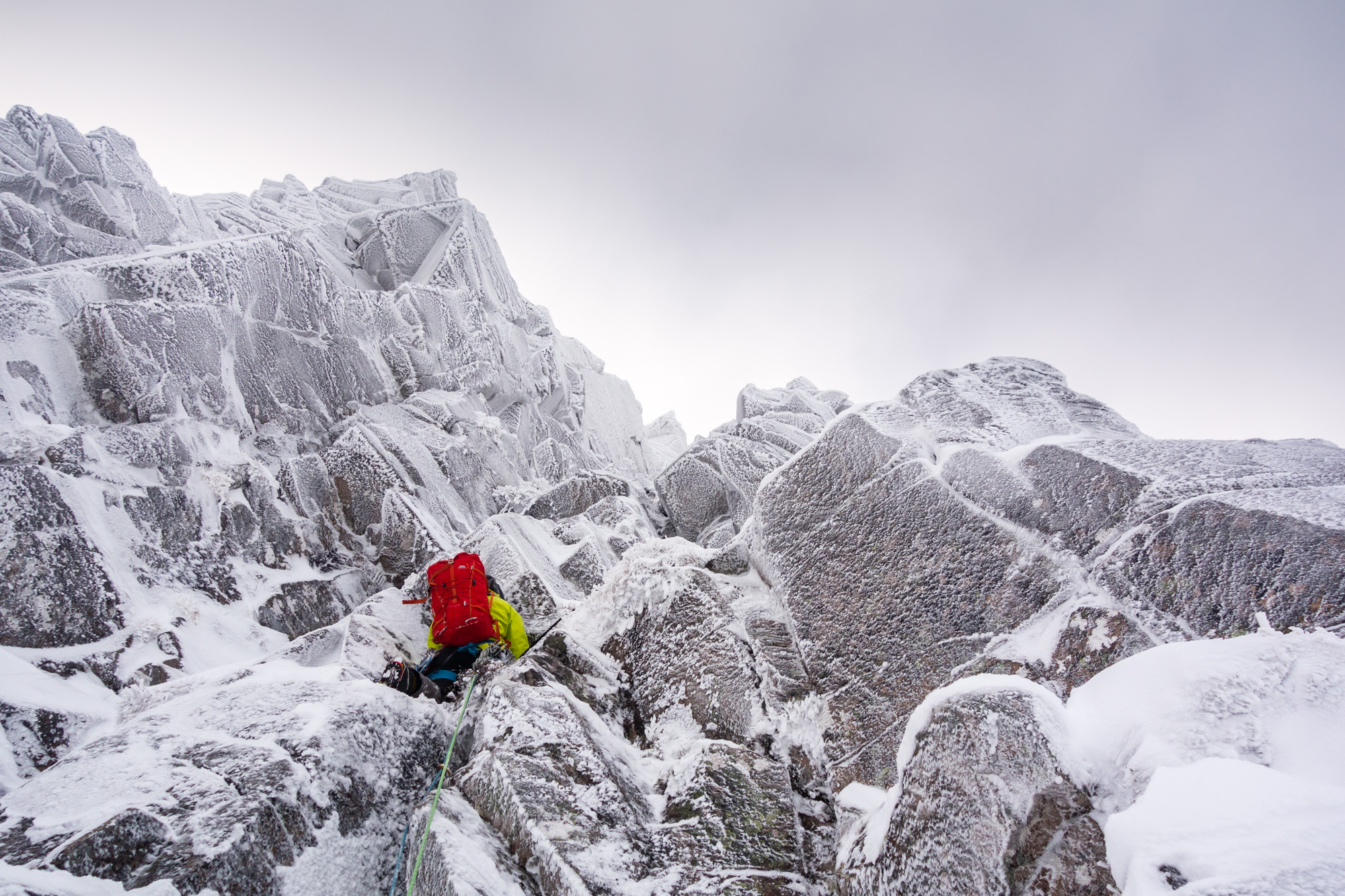 Andy launches straight into the steepness at the start of the first pitch, aiming for the notch leading left past the roof into the main groove 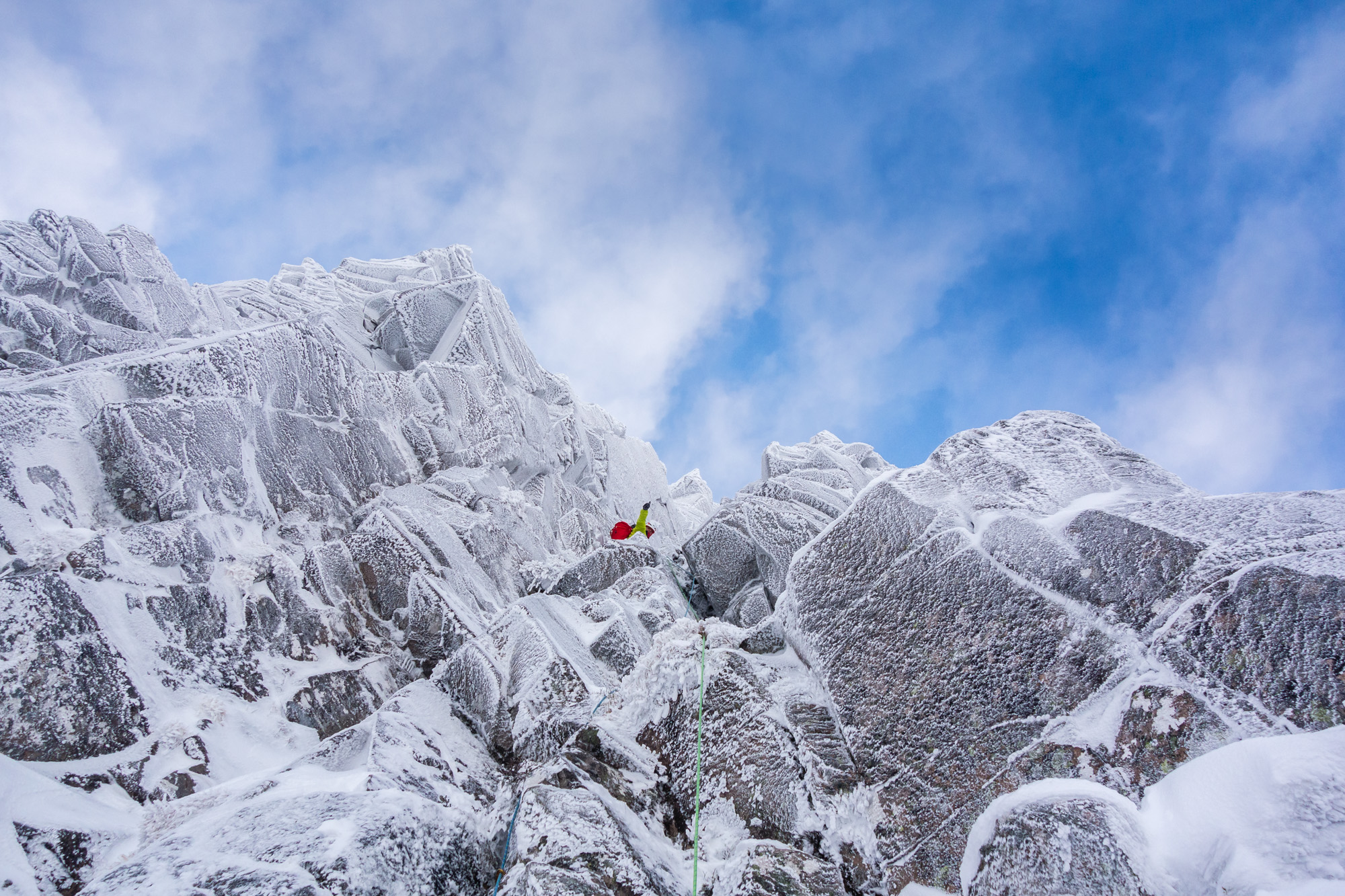 Relieved to be finally though the crux after a much more intense battle than we had bargained for!

The bail tat on a thread below the crux hinted at the horrors to come – awkward contortions, little for the feet, hard-to-place gear and reachy lunges for wobbly hooks. We remarked later how multiple one arm lock-offs and pull-ups didn’t really feel in keeping with the tech 5 grade! Andy persevered and eventually made it through, with the continuation groove proving more amenable, if fairly bold.

A climber enjoys the position on the excellent Transept Groove. I climbed this route in 2017, ironically after an aborted attempt at Judas Priest 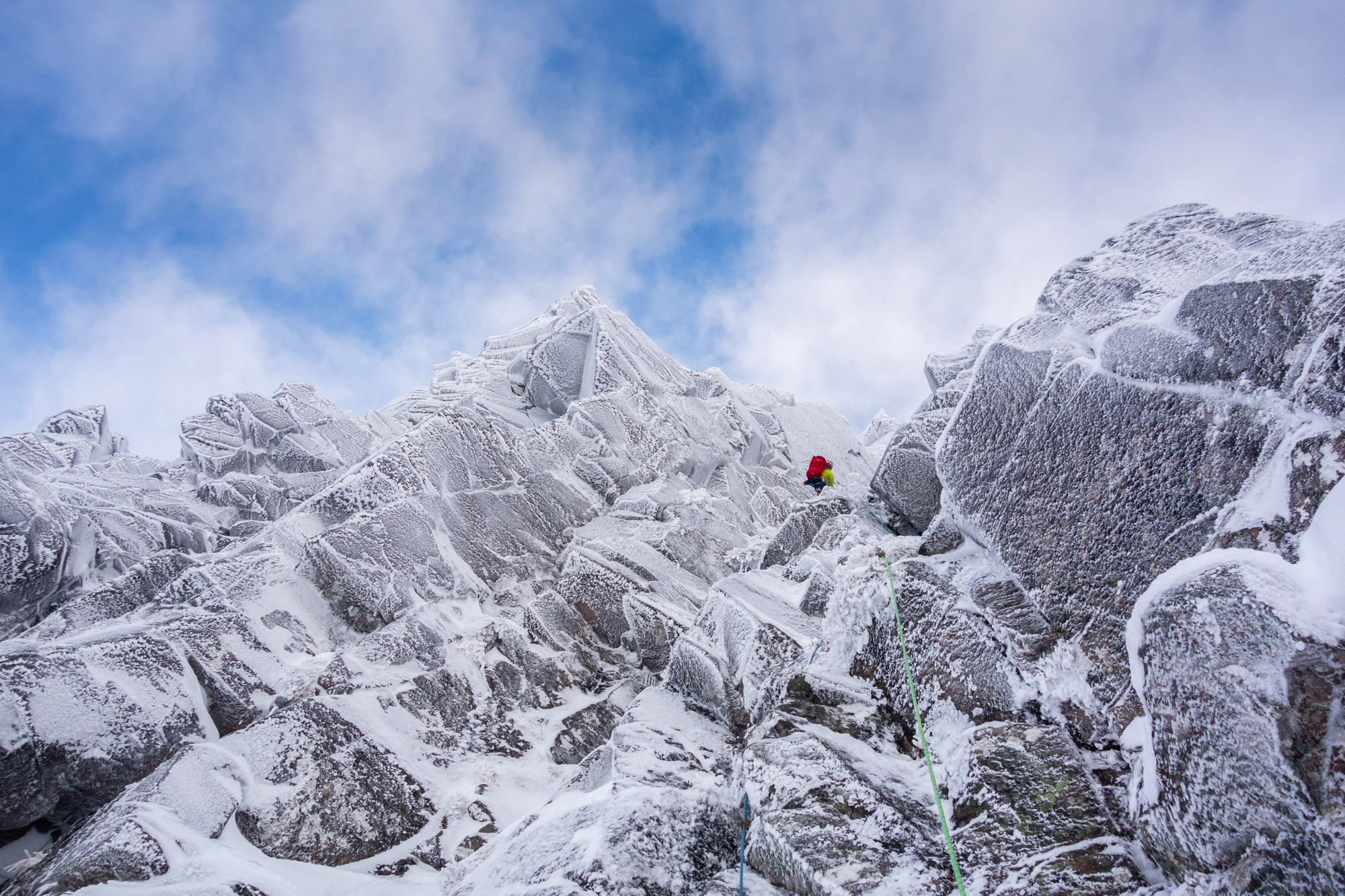 Inching further up the groove, Andy finds a good stance affording a rest after the stressful crux section

A line of turf on the right wall led invitingly across to the blocky crest of the rib overlooking the groove, where better hooks and protection was found. Andy scampered quickly up to belay beneath another steep line of turf, heading towards the top of Cathedral Chimney. Fully warmed up from the the trials below, I ploughed on more confidently, arriving at the plateau a short while later after a more mellow pitch. 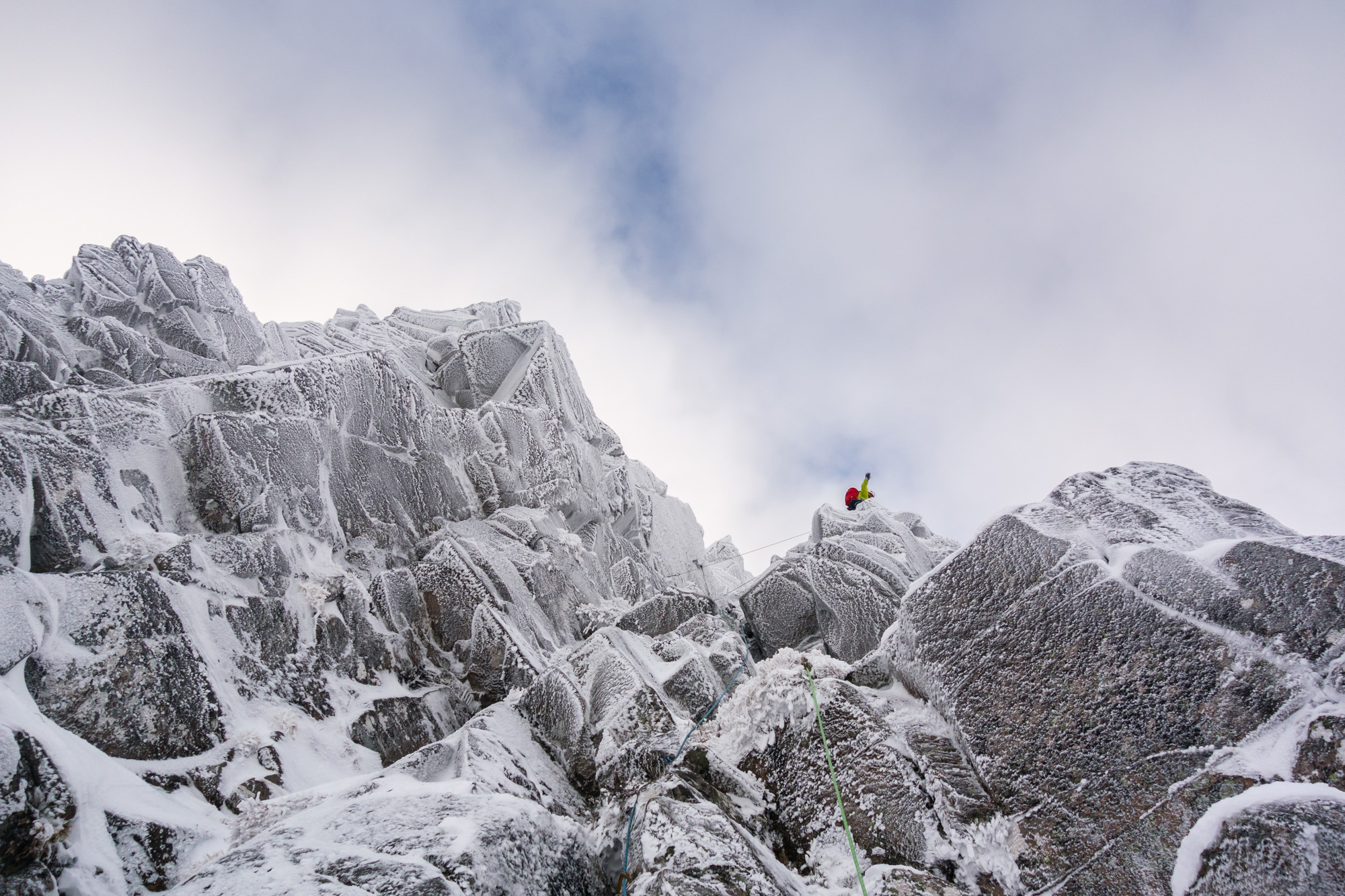 The second pitch was a much more mellow affair, albeit with a bold ten metres of steep turf to start – warthogs are your friends on Lochnagar! Photo credit: Andy Harrison

So slightly more than we bargained for on the first route of the season but a great day out nonetheless – hopefully a sign of things to come! 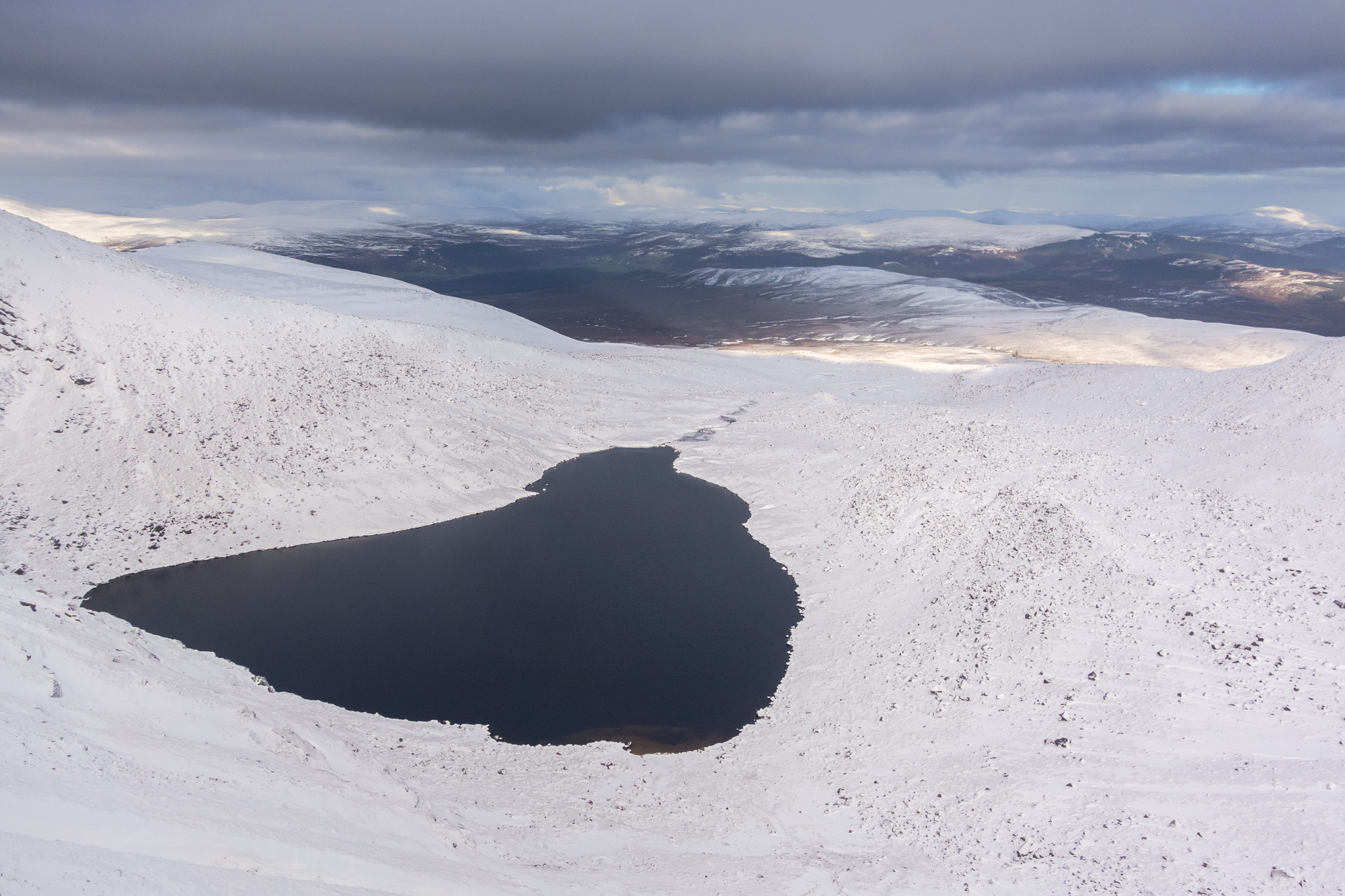 Views out over Deeside and the unfrozen loch. Despite the temperatures I suspect the strong winds have prevented the loch icing up